Swimmers from Nottingham have become the first University team to make a return journey across the channel last month, supported by Nottinghamshire-based automotive manufacturer BM Catalysts. The six brave souls set off from Dover, taking hour-long shifts on the way, before a flip-turn on French shores and kicking back to blighty.

The momentous continental Channel challenge, which has been completed by fewer people than have scaled Mount Everest, was undertaken in support of the Teenage Cancer Trust. Speaking in support of the team’s efforts, BM Catalysts Commercial Director Mark Blinston stated: “When we heard about what these swimmers were doing in the name of such a great cause we immediately wanted to get involved. The physical demands of maintaining momentum in cold, tidal waters seems almost as daunting as overcoming the mental obstacle of motivating yourself to keep going with no end in sight for the vast majority of the journey. I find the whole thing hugely impressive and congratulate the team on their success.”

Alex Kirtley, president of the University of Nottingham swimming club and member of the team commented: “I’d like to thank BM Catalysts on behalf of the team for supporting our challenge through its donation. It not only helped towards the cost of the swim itself, but we put it towards our kit, which was very useful for warming us up after we had been in the water.

“During the momentous challenge of becoming the first university in history to complete a two-way channel swim and in doing so, set a world record, we each took it in turns to swim the gruelling challenge whilst battling two metre waves, severe sea-sickness and exhaustion. We are delighted to say that after barely managing to remain remotely functional, we completed the incredible two-way challenge in a world record time of twenty-four hours and nine minutes. Without the support of each other, as well as our crew, we certainly wouldn’t have been able to achieve what we have, considering that only one other team, from the eight other channel crossing attempts that day, managed to successfully complete their one-way crossing.”

Prior to the swim, the Nottingham University Two-Way Channel Swim Team spent six months training and acclimatising to the cold water that awaited them at Colwick Park, Nottingham, and at ‘Race Hub’, Six Hills, Leicestershire. Their first outdoor swim at the end of April saw even the hardiest of the swimmers last barely half an hour in water, with the most recent session consisting of a full two hours of energetic aquatic activity.

To support the team and the Teenage Cancer Trust, people are being asked to visit the teams Just Giving page at https://www.justgiving.com/fundraising/Notts2waychannelswim. 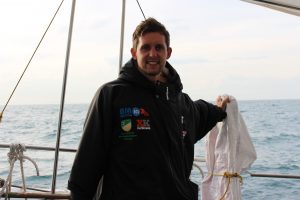